Plavac Mali is a well-known red grape variety from Croatia. Plavac mali, Crijenac, Crnac, Zelenjak, Šarac, Grešavac, Zelenka and Pagadebit crni are names it is also known under. One of Croatia’s most planted varieties, it produces a dense and robust red wine with a black cherry note and hints of pepper, smoke and spice.

Many claim it is the most widespread and significant variety in Dalmatia. After Welschriesling and Malvasia, it is the third most cultivated variety in Croatia. Its name derives from the appearance of the grapes that are small (mali) and blue in colour (plavac). The berries are thick-skinned nd high in sugar content. Alcohol content is 12-13.5 %. It is a full-bodied wine, slightly bitter in taste. Plavac Mali is the first red Croatian wine to receive a PGI (Protected Geographical Indication) as far back as 1961. 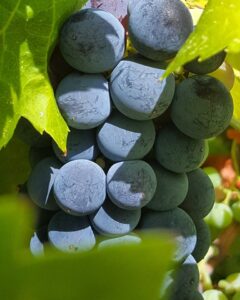 In tracing the origins of Plavac Mali, it was initially thought to be identical to the Californian variety Zifandel. Further research disproved this idea and determined that it was a cross between the Zifandel and Dobričić varieties.
Plavac Mali is cultivated in the Dalmatian hinterland but most widely spread in central and south Dalmatia. On the Pelješac peninsula, the best areas for Plavac Mali are Dingač, Postup and Žuljana. It is also grown o the southern part of Hvar (Sv. Nedilja, Ivan Dolac, Jagodna, Medvidbad) and on the slopes of Brač and Korčula islands. When exposed to strong sun on steep slopes, Plavac Mali is more full-bodied and strong. When grown further inland, the wine tends to be fruitier and lighter.

All the varieties of Plavac Mali owe their differences to climate, soil, production, etc., while sharing the basic grape variety and produce wines with similar alcohol content, taste, acidity and density. Prošek, drunk as an aperitif or on special occasions, is produced from dried clusters of ripened Plavac. Plavac Mali grapes can be eaten fresh and are known as Zobatica or table grapes.

Free cancellation is available up to 48h before the tour. We require only 20% deposit payment during a booking. Bookings are confirmed instantly. Read All Terms & Conditions here.

We collect and store the minimum information possible to provide the services you’ve requested. Read our full policy here.

We use cookies on our website to give you the most relevant experience by remembering your preferences and repeat visits. By clicking “Accept All”, you consent to the use of ALL the cookies. However, you may visit "Cookie Settings" to provide a controlled consent.
Cookie SettingsAccept All
Manage consent

This website uses cookies to improve your experience while you navigate through the website. Out of these, the cookies that are categorized as necessary are stored on your browser as they are essential for the working of basic functionalities of the website. We also use third-party cookies that help us analyze and understand how you use this website. These cookies will be stored in your browser only with your consent. You also have the option to opt-out of these cookies. But opting out of some of these cookies may affect your browsing experience.
Necessary Always Enabled
Necessary cookies are absolutely essential for the website to function properly. This category only includes cookies that ensures basic functionalities and security features of the website. These cookies do not store any personal information.
Non-necessary
Any cookies that may not be particularly necessary for the website to function and is used specifically to collect user personal data via analytics, ads, other embedded contents are termed as non-necessary cookies. It is mandatory to procure user consent prior to running these cookies on your website.
SAVE & ACCEPT